Foods To Be Avoided This Christmas - Allergy Test

Foods To Be Avoided This Christmas

Food is ubiquitous at Christmas. More than any other time, food plays a central role in everything we do. Boxes of chocolates, mince pies, and big Christmas dinners are everywhere. For most people, this is one of the great joys of the festive period, all shackles are off, and it is time to indulge. However, there are some people for whom this represents a real problem. When you’re living with food intolerances, enjoying the banquet before you can be an exercise in restraint for want of triggering unwanted symptoms, including bloating, sickness, and fatigue.

So, we thought we’d take a look at some food intolerances and the trigger foods sufferers will need to avoid this yuletide. 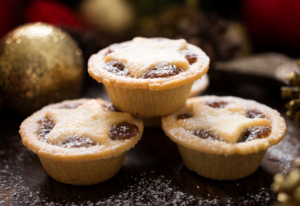 How incredibly lucky that Santa doesn’t live with food intolerances to gluten. If he did, he would have an incredibly hard time every time he came down the chimney to find tasty mince pies waiting for him. By eating a mince pie, Santa could leave himself struggling to get down any further chimneys as his stomach bloated and made things a bit more snug. Fortunately, there is an increasing range of free-from mince pies, created to help those with food intolerances to gluten enjoy this most festive of treats.

Eggnog has its origins in British aristocracy. Drank by the wealthy to keep warm during the cold of winter, this spiced milk drink is still incredibly popular today. However, did you know that people are living with food intolerances to eggs? This means that to avoid symptoms such as diarrhea, sufferers have to find other ways to indulge in a festive, hot, alcoholic beverage. This drink is also out of bounds for people with a dairy or lactose intolerance due to the milk content.

Ok, so maybe not as upsetting as the first two foods, but vegetables are a vital source of many nutrients and minerals that are in short supply at Christmas. With all the unhealthy foods you’re eating at this time of year, the fiber in vegetables becomes even more essential to maintain digestive health and keep those foods moving through your system. For people with IBS, certain vegetables can irritate symptoms and make Christmas misery.

Ok, we’re back with a humdinger here. Chocolate. One of the, if not THE, most commonly gifted things on the planet, chocolate can cause horrible symptoms, including severe fatigue for people who’re living with a sugar intolerance. Imagine being bought a box of chocolates and having to pass on it. If you take an intolerance test, you can identify your food intolerances and enjoy Christmas by avoiding the associated symptoms.